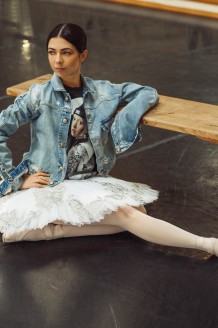 She graduated from the Kiev State Choreographic School as a ballet dancer, teacher-choreographer. In 2014 she graduated from the Kiev National University of Theater, Film and Television named after I. Karpenko-Kary, faculty of directing classical ballet, on the course of professor, People's Artist of Ukraine A.S. Kushnereva. From 2010 to 2013 she was a ballet dancer at the Dnepropetrovsk Academic Opera and Ballet Theater. In 2004, being a student of the choreographic school, she was invited by the Shevchenko National Opera of Ukraine on a tour to Mexico. She has toured with the Classical Russian Ballet of Moscow (under the direction of Khasan Usmanov) throughout Europe and the Near Abroad. In 2016 she took part in a gala concert of world ballet stars (Stuttgart, Germany). She worked in China, Poland, Germany, Spain, Italy, Romania, Holland, Belgium. Since 2013, she has been a ballet dancer at the Odessa National Academic Opera and Ballet Theater. Performed the parts: