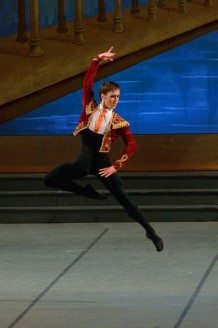 Winner of the II International Children's Art Festival "Veszprem Games" in Hungary in 2000; laureate of the International Children's Festival-Competition "Constellation of Budapest - Youth, Inspiration, Talent" in Hungary in 2002; laureate of the international children's competition "Sea constellation - sun, youth, beauty" in the Bulgarian Burgas in 2002 and 2003. Graduated from the Kiev State Choreographic School in 2009 and the National Pedagogical University named after Mikhail Dragomanov in 2013. She has been working at the Odessa National Academic Opera and Ballet Theater since 2011. Performed by: He has toured to the USA, Canada, France, Spain, Italy, China, Hungary, Holland, Belgium, Poland, Germany, Japan, Austria.