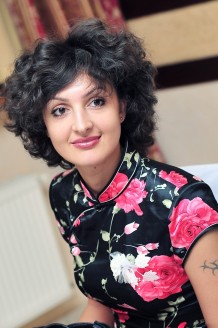 Winner of the Grand Prix of the All-Ukrainian Competition of Vocal Art named after Boris Gmyri (2008), laureate of the 1st prize at the International Competition "Southern Express" (Yalta, 2009). Laureate of the 1st prize of the international competition "Art of the XXI century" (Kiev - Vorzel 2010). She graduated from the Rivne Music School with a degree in choral conducting in 2004. She worked as a teacher of vocal and choral disciplines at the Rivne Music School No. 2. In 2011 she graduated from the Odessa State (now - National) Music Academy named after I. Antonina Nezhdanova, specializing in solo singing. In 2009, while a student at the Academy, she made her debut at the Odessa National Academic Opera and Ballet Theater as Carmen in the opera of the same name by Georges Bizet, directed by Bert Bijnen (Holland). Soloist of the Odessa National Academic Opera and Ballet Theater 2011 Performed the parts: