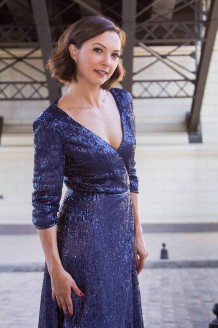 Laureate of the I prize at the VI All-Ukrainian vocal and instrumental competition in Nizhyn (Ukraine); I Prize at the III International Vocal Competition. Oksana Petrusenko in Kherson (Ukraine); Grand Prix of the International Competition-Festival "Southern Express" in Yalta (Ukraine); I Prize of the IV International Festival of Arts "On the Waves of Music" in Odessa (Ukraine). Graduated with honors from the Nikolaev State Higher School of Music (piano and vocal faculties, as well as the faculty of choral conducting). After that she received her master's and postgraduate degrees at the Odessa National Music Academy named after I. A. Nezhdanova, specializing in solo singing (class of Honored Artist of Ukraine, Professor Alisa Dzhamagortsyan). In 2016-2018 she took part in concerts and performances of the Opera Vo Blago Theater charity project. In 2016 she became a semi-finalist of the II CLIP Vocal Competition in Portofino (Italy), as well as the XIII International Ricardo Zandonai Vocal Competition in Riva del Garda (Italy). In the same year, she took an active part in a master class by Luciana d'Intino and Beatrice Benzi (coach of La Scala theater), specializing in vocal technique, after which she received positive reviews and a letter of recommendation from La Scala theater. In 2017 she reached the semifinals of the Otto Edelman International Opera Singing Competition in Vienna (Austria), and in 2018 she became a semifinalist at the 1st Opera Crown International Opera Singing Competition at the Tbilisi Opera House. In 2017 she became a soloist of the Theater of the New Generation, where she performed music by G. Rossini and G. Gershwin. Since 2018 she has been working as a soloist of the Odessa National Opera and Ballet Theater. In 2019, she reached the semifinals of the XXXVIII International Belvedere Singing Competition in Jurmala (Latvia), and also conducted a tour of China with the National Symphony Orchestra of Ukraine (conducted by Niccolo Giuliani). Performed the parts: Takes part in the theater's concert programs, performing various works.
«Carmen»:
Mikaela
«Orpheus and Eurydice»:
Eurydice
(УКР) «Орфей і Еврідіка»:
(УКР) Еврідіка
(УКР) «Дон Жуан»:
(УКР) Донна Ельвіра
(УКР) «Травіата»:
(УКР) Аннина
(УКР) «Білосніжка і сім гномів»:
(УКР) Білосніжка
(УКР) «Запорожець за Дунаєм»:
(УКР) Оксана
(УКР) «Маскарад»:
(УКР) Ніна
(УКР) «Stabat mater»:
(УКР) партія сопрано