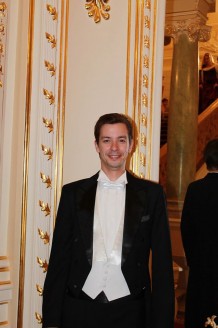 A graduate of the Vinnytsia School of Culture and Arts. MD Leontovich majoring in "choral conducting" (2003), Odessa National Academy of Music. AV Nezhdanova majoring in "choral conducting" (2008) and "solo singing" (2009). In 2011 he graduated from the Academy with a degree in choral conducting. Since 2009 he has been working at the Odessa National Academic Opera and Ballet Theater as a choir artist and choirmaster. As a choirmaster he conducts performances of "Eyelashes" by V. Hubarenko, "Rigoletto", "Troubadour" by G. Verdi, "Barber of Seville" by G. Rossini, "Zaporozhets over the Danube" by S. Gulak-Artemovsky and others. He has toured in Germany, Hungary, Greece, Spain, Poland, Russia, and Belarus. In 2017, he performed as the choirmaster-director of the ballet "Fate" by Yu. Homelska.