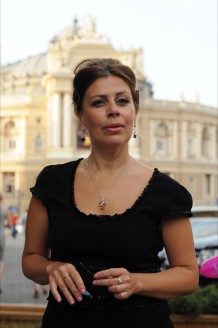 She graduated from the Cherkasy College of Music, piano. , Odessa State (now - National) Conservatory named after Antonina Nezhdanova in 1994 (at the same university - master's degree in 2009). Laureate of the II Prize at the VIII International Festival of Ukrainian Song in Truskavets (1998). Winner of the Grand Prix at the International Festival-Competition of Choral and Vocal Art named after Fedor Chaliapin (Yalta, 2012). Has been working at the Odessa Opera and Ballet Theater since 1994. The singer's repertoire includes: