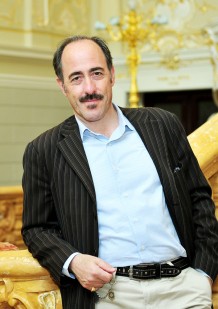 Studied with Felice Chiavi, Ruggiero Orofino, Celestina Casapietri and Maria Chiapa. He is the winner of a number of international vocal competitions, the most important of which are Voci Verdiane (Parma, Italy) and Ismael Voltolini (Mantua, Italy). He performed parts in Giuseppe Verdi's operas "The Power of Fate" (Don Alvaro), "La Traviata" (Alfred), "Troubadour" (Manrico), "Aida" (Radames), as well as Giacomo Puccini's "Bohemia" (Rudolph), "Longing". (Cavaradossi), Madame Butterfly (Pinkerton). As a director he staged operas in Italy, South Korea, Belarus and Russia. In particular, these are "Masquerade Ball", "Don Carlos", "Nabucco", "Aida", "La Traviata", "Troubadour" and "Rigoletto" by Giuseppe Verdi; Gioacchino Rossini's The Barber of Seville; "Don Pasquale" and "Love Drink" by Gaetano Donizetti; "Maid's Maid" by Giovanni Battista Pergolesi; "Mona Lisa" by Amilcare Ponchielli; "Girl from the West", "Longing", "Bohemia", "Madame Butterfly" and "Turandot" by Giacomo Puccini; "Carmen" by Georges Bizet. Carlo Antonio de Lucia was the producer of a number of opera festivals, such as Lario Lirica in Como (Italy) from 1998 to 2006, Bitonto (2006), Stagione Lirica in Lecce (2011 and 2012), and the 2005/2006 opera season. at the Manzoni Theater in Rome. Maestro de Lucia taught at a number of universities. In 2010/2011 he taught opera classes at the State University of Milan. He is currently an adjunct professor at the Universities of Seoul, Suwon (South Korea) and the State University of Milan (Italy). Carlo Antonio de Lucia's work as an impresario was awarded by the Italian Ministry of Culture in 2003.