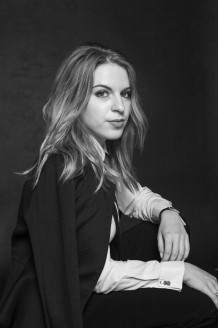 Was born in Crimea in 1994. At the age of 5, she began to study at a music school piano class. After winning the 2004 "Vivat, musica!" (G .. New Kakhovka) in the nomination "composition" (class of A.S. Tomlenova), began her studies at Odessa Secondary Special Music Boarding School. Professor P. S. Stolyarsky, specializing in vocal and choral conducting (class of T.A. Yakovchuk and KuzubO.M.). In 2006, as a vocalist, she took part in a concert of the Vladimir Foundation Spivakov in the Moscow Kremlin.

For the first time she conducted an orchestra at the age of 15.

In 2013, as part of an internship with the Crimean Academic Symphony Orchestra conducted by Igor Kazhdan conducted several concerts in Yalta and Sevastopol.

In 2014, she began her studies at the National Music Academy of Ukraine named after P.I Tchaikovsky (Kiev) with a degree in opera and symphonic conducting class of Professor, People's Artist of Ukraine Vlasenko A. During his studies has conducted concerts with works by G. Verdi, V.A. Mozart, A. Dvořák, M. Ravel, J. Sibelius, P. Tchaikovsky, I. Brahms and I. Stravinsky and made her debut at the Opera Studio.

As a conductor of the "Artokrats" ensemble, she took part in the "Mute Nights -2015" festival, dubbing a Ukrainian silent film. Also together with "Artokrats" she performed music by G.Percell, A.Pärt, F.Glass, M. Boyko.

(G. Kherson). Also in 2016 she made her debut with a concert on the small stage Belle-floor in Odessa

In 2017-2019 Participated in Lviv MozArt in Lviv, where she conducted baroque and contemporary music with countertenors and a gala concert with Pumeza Matsikiza (soprano) and Nuttaporn Thammati (tenor). She also worked at the festival Lviv MozArt as project manager for the Mozart dynasty.

In 2017, Margarita took part in the Third International Competition conductors to them. S. Turchak (Kiev).

Since June 2018 he has been working as a conductor of the Odessa National Academic Opera and Ballet Theater. Her repertoire includes the operas "Orpheus and Eurydice" by K.V. Gluck, "The Barber of Seville" by G. Rossini, "La Traviata" by G. Verdi, "Zaporozhets for

Danube "S. Gulak-Artemovsky and ballets "The Nutcracker" by P. Tchaikovsky and "Masquerade" by A. Khachaturian and performances for children. She also spent opening concert of the Christmas festival and a concert dedicated to Memorial Day Heroes of the Heavenly Hundred, where Pergolesi conducted "Stabat Mater" and works F. Handel, I.S. Bach, A. Corelli, S. Barber and M. Skorik.

In November 2019 she conducted works by L. V. Beethoven, Haydn, A. Vivaldi, I.K. Bach and F. Devienne in the framework of concerts for children with the Chamber Orchestra Odessa Philharmonic.

Margarita is the author of the concept and implementer of the night performance with integration architecture, vocals and ballet "Ghosts" at the Odessa Opera.

In October 2019, he staged the opera Lucia di Lammermoor with Lvov Philharmonic Orchestra as part of Lukash - Fest in Lviv.

Also in October 2019 she was invited by Oksana Lyniv's music assistant and conductor of the production of "Aida" by G. Verdi in Luxor, Egypt.

In November 2019, she was an assistant to Oksana Lyniv during a new production of Prokofiev's Cinderella ballet and a symphony concert program based on works by Tchaikovsky, Liszt and Genin at the Opera Graz (Austria).