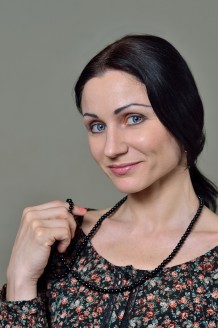 Honoured Artist of the Republic of Moldova

Laureate of the National Prize of the Republic of Moldova for Literature and Art. Laureate of the International Choreographic Competition in Constanta (Romania, 1994), winner of the III Prize and the Audience Award at the All-Russian Competition. Agrippina Vaganova for students of choreographic schools (St. Petersburg, 1995), participant of the Arabesque Open Competition of Ballet Dancers (Perm, 2002). Graduated from the National Choreographic College in Chisinau (teacher Elvira Kern), then from the Moldavian Academy of Music, Theater and Fine Arts with a degree in choreography in 2004. From 1995 to 2009 she worked at the National Opera and Ballet Theater of the Republic of Moldova (teacher Elena Tsarikova). Has performed leading roles in all classical ballets in the theater's repertoire, as well as many numbers of contemporary choreography. She was invited to the Odessa National Academic Opera and Ballet Theater in 2009.

as well as contemporary choreography directed by Radu Poklitaru and Boris Eifman.

She collaborated with the choreographers:

She collaborated with Moscow Theater "Imperial Russian Ballet", "Russian National Ballet" and the Ballet Theatre of classical choreography La classique. She has taught classical dance in several US cities.