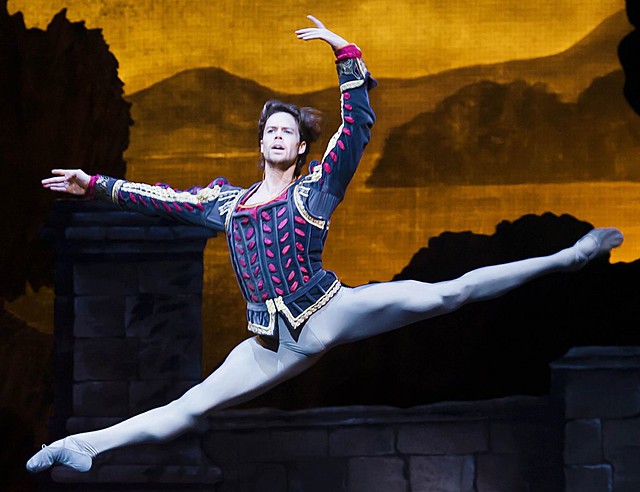 Premier National Royal Ballet, Het National Ballet, Munich Staatsballet. As a guest soloist he performs at the American Ballet Theater (USA), theaters in Hong Kong, Beijing, and others. Has taken part in the iconic festivals named after Rudolf Nureyev, the World Ballet Festival in Tokyo and others. His repertoire includes the roles of Onegin in the ballet of the same name by John Cranko, Vronsky in Anna Karenina, Desiree in The Sleeping Beauty, princes in Swan Lake and The Nutcracker, Romeo in the ballet Romeo and Juliet, and so on. Matthew Golding was born in the Canadian province of Saskatchewan, where he began dancing at the age of eight. The 14-year-old dancer began his professional ballet training at the Royal Winnipeg Ballet School, then transferred to the Ballet Academy in Washington, where he successfully studied on a scholarship for two years. At the age of 16, Golding received a prestigious Lausanne award, which gave him the opportunity to study at the Royal Ballet School in London, from which he graduated with honors. As lead dancer, Matthew Golding joined the Royal Ballet in February 2014, but left the stationary stage three years later and went as a guest artist to the Hong Kong Ballet (Conrad in Le Corsaire). The dancer also appears as an invited guest at the Mariinsky Theater in St. Petersburg, in Japan, South Korea and at many ballet festivals around the world. In 2018, Matthew Golding visited Kiev twice, where he performed in tandem with the Honored Artist of Ukraine (also a guest of the current "Velvet Season at the Odessa Opera") Natalia Matsak. Before that, the couple had already successfully performed in France, Germany, Belgium, Holland. On the first visit of the star European, the artists danced together on the Ukrainian stage the ballet La Bayadere. The play was filmed and broadcasted throughout Europe by the famous French channel Mezzo. “In Japan, Matthew Golding is called the Canadian Brad Pitt because of his resemblance to a Hollywood star. My partner's texture, appearance and character are ideal for the ballet La Bayadere. This story is about a warrior, so the soloist must be a strong and courageous person. In addition, it is emotionally convincing, so that it is clear why a person is going to die. Matthew is a world-class dancer, and we have long dreamed of inviting him to the country, ”Natalia Matsak told the media. For the second time, Matthew Golding returned to the Kiev stage in honor of the 150th anniversary season of the National Opera of Ukraine. The celebrity couple presented the audience with the play "Swan Lake", filled with the unique spirit of the English ballet school.