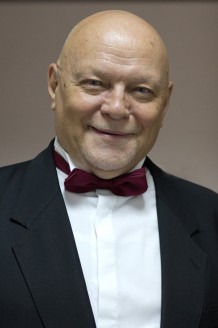 People's Artist of Ukraine. Professor of Chair of solo singing of the Odessa National Music Academy named after Nezhdanova

In 1972, Vasily Navrotsky graduated with honors from the Odessa State Conservatory (now the Odessa National Music Academy) named after I. A. V. Nezhdanova in the class of Professor, Honored Artist of Ukraine Yevgeny Nikolaevich Ivanov. As a student, he became a laureate of the Republican Competition of Vocalists in Kiev (1968) and a laureate of the All-Union Competition of Vocalists. M.I. Glinka in Vilnius (1971). In 1972, Vasily Navrotsky was invited to the Kuibyshev (now Samara) State Opera and Ballet Theater, where he performed about thirty parts in operas and operettas. Among them: Mephistopheles ("Faust" by Charles Gounod), Don Juan and Leporello ("Don Giovanni" by Wolfgang Amadeus Mozart), Don Basilio and Don Bartolo ("The Barber of Seville" by Gioacchino Rossini), Sobakin ("The Tsar's Bride" by Nikolai Rimsky-Korsakov ), Prince Igor and Prince Galitsky ("Prince Igor" by Alexander Borodin), Ramfis and the Pharaoh ("Aida" by Giuseppe Verdi), Eisenstein and Falk ("The Bat" by Johann Strauss), Porgy ("Porgy and Bess" by George Gershwin) and other parties. The singer twice became a laureate of the All-Union competition of creative youth: in the theatrical seasons of 1973-74. and 1976-77. Since 1979, Vasily Navrotsky has worked as a soloist at the Dnepropetrovsk State Opera and Ballet Theater, where he prepared and performed a number of leading roles. Among them - Boris, Pimen and Varlaam ("Boris Godunov" by Modest Mussorgsky), Figaro ("The Wedding of Figaro" by Wolfgang Amadeus Mozart), Dr. Annibale ("Bell" by Gaetano Donizetti), Grigory Melekhov ("Quiet Flows the Don" by Ivan Dzerzhinsky), Salieri ("Mozart and Salieri" by Nikolai Rimsky-Korsakov), Aleko and the old gypsy ("Aleko" by Sergei Rachmaninov), Krivonos ("Bogdan Khmelnitsky" by Konstantin Dankevich), Kochubei ("Mazepa" by Pyotr Tchaikovsky), Karas ("Zaporozhets for Dankevich) "Semyon Gulak-Artemovsky), Vyborny (" Natalka-Poltavka "by Nikolai Lysenko) and other parties. In 1979 and 1982, Vasily Navrotsky took part in the All-Union Festivals of Young Opera Singers in Minsk. Carried out stock recordings of opera and chamber music on the republican radio. In 1985, the singer was awarded the title of Honored Artist of Ukraine. In 1991, Vasily Navrotsky was invited to work at the Odessa State Conservatory. A.V. Nezhdanova, where he took the class and department of the untimely deceased Professor Evgeny Ivanov. On account of the teacher Vasily Navrotsky - over forty graduates, including laureates of international competitions, soloists of La Scala theaters in Milan, the Metropolitan Opera in New York, the Mariinsky Theater in St. Petersburg, the Chamber Theater in Moscow, the Odessa National Academic Opera and Ballet Theater, opera houses in Germany, Czech Republic and other countries. In parallel with teaching, leading and concert activities, Vasily Navrotsky has been a soloist of the Odessa National Academic Opera and Ballet Theater since 1991, one of the leading bassists of Ukraine. His repertoire includes over forty operatic roles performed in various theaters in the country and abroad, as well as numerous concert programs. Possessing great acting talent, Vasily Navrotsky created a whole gallery of vivid, memorable images in opera performances. He is equally good at both tragic, dramatic and comic images, convincing with their integrity and deep penetration into musical and dramatic material. Vasily Navrotsky became the first performer of the part of Moses in the eponymous opera-oratorio by Miroslav Volynsky on the verses of Ivan Franko. He repeatedly toured abroad: in Bulgaria, Germany, Switzerland, France, Slovenia, Finland, England, Spain, participated in international opera festivals in Ljubljana (Slovenia). From 1997 to 2000, Vasily Navrotsky worked at the Stuttgart Opera and Ballet Theater (Germany), where he collaborated with outstanding singers and conductors - Paata Burchuladze, Philip Ens, Janos Kulka and many others. Vasily Navrotsky sang in performances of the Bolshoi and Mariinsky theaters, at the Kiev National Opera. He worked with outstanding masters of the opera stage, conductors Iosif Aizikovich, Yaroslav Voshchak, Boris Afanasyev, Boris Gruzin, Boris Blokh, Viktor Fedotov, Veronika Dudarova, Vadim Gnedash, Yevgeny Kolobov, Gennady Alexander Provotorov, and Alexander Provotorov. In 2011, Vasily Navrotsky was awarded the title of People's Artist of Ukraine. In June 2012, he celebrated the 40th anniversary of his creative activity.