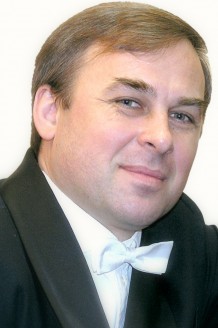 Graduated from the Odessa State Conservatory (now - National Music Academy) named after I. Antonina Nezhdanova in 1994 with a degree in solo singing (class of People's Artist of Ukraine Anatoly Duda), then with a degree in chamber singing in the class of Honored Artist of Ukraine Elena Stakhovskaya (in 1996). He worked as a soloist of the Odessa Regional Philharmonic, the city chamber theater, the opera studio at the conservatory. Collaborated with the National Opera of Bashkortostan. From 2004 to 2006 - soloist of the Kharkov Academic Opera and Ballet Theater. He was invited to the Odessa Opera and Ballet Theater in 2006. Performed the parts: Has toured in Spain.
"Il Trovatore" by Giuseppe Verdi:
Manrico
"La Traviata" by Giuseppe Verdi:
Alfredo
"Aida" by Giuseppe Verdi:
Radames
"Nabucco" by Giuseppe Verdi:
Ismaele
"Turandot" by Giacomo Puccini:
Calaf
"Lucia di Lammermoor" by Gaetano Donizetti:
Edgar
"Iolanta" by Pyotr Tchaikovsky:
Vaudemont
"The Queen of Spades" by Pyotr Tchaikovsky:
Herman
"Pagliacci" by Ruggero Leoncavallo:
Canio
"Katerina" by Nikolay Arkas:
Andrey
"Cossack beyond the Danube" by Semyon Gulak-Artyomovskiy:
Andrey
"Cavalleria Rusticana" by Pietro Mascagni:
Turiddu
tenor in the "Requiem" by Giuseppe Verdi and other parties.: