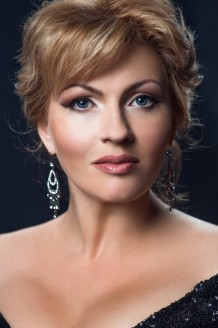 Winner of a gold medal and a special prize of the international vocal competition named after Hariklei Darkle (Romania, 2005), winner of the 1st prize of the Antonin Dvorak International Vocal Competition (Karlovy Vary, Czech Republic, 2003), winner of the 3rd prize of the Antonin Dvorak International Music Competition. Mykola Lysenko (Kyiv, 2007). In 2003 she graduated with honors from the Odessa National Music Academy named after Antonina Nezhdanova in the class of solo singing; 2007 - performing postgraduate studies (class of People's Artist of Ukraine, Professor Halyna Polyvanova). Since 2011 he has been working in the troupe of the Odessa National Academic Opera and Ballet Theater. From 2003 to 2009, the singer took part in the Young Opera Voices of Ukraine concerts at the National Opera of Ukraine (Kyiv), opera concerts at the Prague and Warsaw Operas, and the Donetsk National Opera and Ballet Theater. Performs: The singer works closely with the Odessa Chamber Orchestra under the direction of Honored Artist of Ukraine Igor Shavruk and the National Philharmonic Orchestra under the direction of Hobart Earl. Lecturer at the Department of Solo Singing, Odessa National Music Academy named after Antonina Nezhdanova.