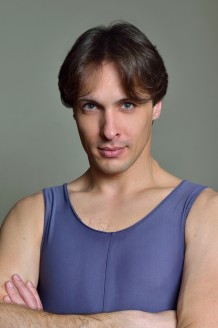 Graduated from the Kiev State Choreographic School with a degree in choreography in 1996, and in 2001 - from the Kiev National University of Culture and Arts, faculty of modern choreography. He was invited to the ballet troupe of the Odessa National Academic Opera and Ballet Theater in 1997. Performed: As a choreographer - together with Yanina Kiseleva - staged the ballet for children "Little Red Riding Hood". He has toured in France, Italy, Spain, Greece, Switzerland, Germany, USA, Canada and other countries. In 2007, he was awarded an honorary diploma of the head of the Odessa Regional State Administration for significant creative achievements, significant personal contribution to the development of national ballet art and high professional skills. The title of Honored Artist of Ukraine was awarded in March 2012.