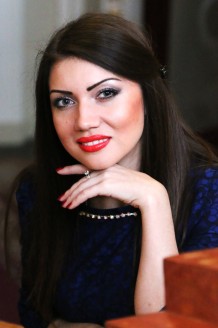 Laureate of the 1st prize of the International Festival-Competition "Let's fill our hearts with music" (Odessa, 2008); 1st Prize of the International Competition Star Music Champion (Romania, 2011). In 2011 she graduated from the Odessa State (now - National) Music Academy named after I. Antonina Nezhdanova with a degree in solo singing. In 2014 she graduated from the graduate school at the department of solo singing of the same university. Since 2013 she has been the leading soloist of the Odessa National Academic Opera and Ballet Theater. Performed the parts: