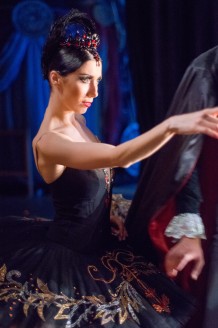 Diploma-recipient at the IV International Yuri Grigorovich Competition Young Ballet of the World (Sochi 2012). She graduated from the Odessa State Choreographic School. Graduated from the Faculty of Classical Choreography of the Odessa School of Arts and Culture. K.F.Dankevich; choreography faculty of the International Slavic University in Kiev, having graduated as a ballet dancer, teacher-tutor. She was invited to the Odessa Opera and Ballet Theater in 2007. The ballerina's repertoire includes: She has toured with the troupe of the Odessa National Academic Opera and Ballet Theater in Italy, Spain, Tunisia, Germany, France, Russia, Portugal, China, Switzerland.