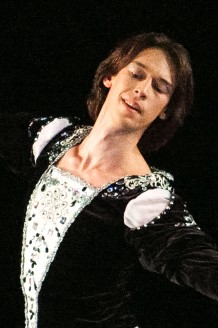 Participant of the IV International Yuri Grigorovich Competition "Young Ballet of the World" (Sochi, 2012). In 2009 he graduated from the Moscow State Academy of Choreography, class of Honored Artist of Russia Yuri Vasyuchenko. In 2011 he was hired by the Odessa National Academic Opera and Ballet Theater. Performed the parts:

He also performed the leading ballet role in the production of Carl Orff's stage cantata Carmina Burana, which was shown on June 4, 2013 as part of the II International Festival of Arts at the Odessa Opera.