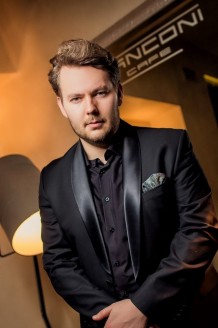 Graduated from the Odessa National Music Academy named after A.V. Nezhdanova (class of Academician, Professor, People's Artist of the URSR, Head of the Department of Solo Singing G.A. Polivanova). From 2011 to 2014 he worked as a soloist at the Odessa Academic Theater of Musical Comedy named after Mikhail Vodyanoy. Currently he is a soloist of the Odessa Academic Ensemble of Ukrainian Music, Song and Dance "The Seagull" in the Odessa Regional Philharmonic. Since 2015 he has been working in the opera troupe of the Odessa National Academic Theater of Opera and Ballet. He has toured in Poland, Moldova, Bulgaria, Romania, Slovenia, Czech Republic, Hungary, Austria, Germany, France, Spain, Belgium, the Netherlands, Italy. Collaborated with conductors A. Samoile, I. Chernetsky, V. Kovalchuk, V. Regrut, I. Shavruk, V. Perevoznikov, H. Earl, D. Pritula.   Performs:
"Eugene Onegin" by Peter Tchaikovsky:
Triquet
"The Queen of Spades" by Peter Tchaikovsky:
Chekalinskiy
"Prince Igor" by Alexander Borodin:
Ovlur and Volodimir Igorovich
"Aida" by Giuseppe Verdi:
Messenger
"Iolanta" by Peter Tchaikovsky:
Alméric and Vaudémont
"Didon and Aeneas" by Henry Purcell:
Sailor
"Turandot" by Giacomo Puccini:
Pang
"Nabucco" by Giuseppe Verdi:
Ismaele
"Il Trovatore" by Giuseppe Verdi:
Ryuits