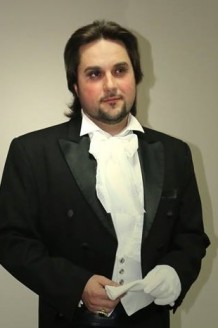 Winner of the International Vocal Competition in Vorzel (Kyiv Region) and the All-Ukrainian Vocal Competition in Kharkiv. In 2010 he graduated from the Odessa State (now - National) Academy of Music. Antonina Nezhdanova in the class of solo singing. He has been working in the opera troupe of the Odessa National Academic Opera and Ballet Theater since 2009. In the repertoire of the party performer:
Don Giovanni" by Wolfgang Amadeus Mozart:
Don Juan
"Eugene Onegin" by Pyotr Tchaikovsky:
Eugene Onegin
"The Queen of Spades" by Pyotr Tchaikovsky:
Prince Yeletsky
"Lucia di Lammermoor" by Gaetano Donizetti:
Lord Enrico
"La Traviata" by Giuseppe Verdi:
Marchese d'Obigny
"La Boheme" by Giacomo Puccini:
Schaunard
"Turandot" by Giacomo Puccini:
Ping
"The Barber of Seville" by Gioachino Rossini:
Fiorelli
“Snow White and the Seven Dwarfs" by Eduard Kolmanovsky:
Leader
"Emerald City" to music by different composers:
Iron Man