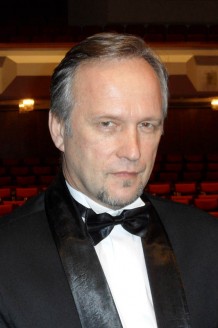 While still a student at the conservatory, he became the winner of the third prize of the international vocal competition named after Antonin Dvorak (Karlovy Vary, Czech Republic, 1989) and the winner of the III prize of the All-Union competition named after Mikhail Glinka (1989) in the nominations "opera performance". He is also the winner of the 3rd prize at the International Vocal Competition in Verviers (Belgium, 1990). He participated in international festivals. Peter Tchaikovsky, the international festival. Leonid Sobinov, the international festival-competition of choral and vocal art named after Fedor Chaliapin (Russia). He has been working in the opera troupe of the Odessa National Academic Opera and Ballet Theater since 1990. In the period from 2003 to 2005 he worked at the Bolshoi Theater of Russia. The singer's repertoire includes more than thirty leading parts, including Yeletsky and Mazepa (opera "The Queen of Spades" and "Mazepa" by Peter Tchaikovsky), Ruprecht (Sergei Prokofiev's opera "Fiery Angel"), Ford, Count di Luna, Renato, Rigoletto, Macbeth , Nabucco (operas "Falstaff", "Troubadour", "Masquerade Ball", "Rigoletto", "Macbeth" and "Nabucco" by Giuseppe Verdi). Victor Mityushkin collaborates with the music agency Concertdirekcion Schlote. He performed on the stages of Festschpil Haus in Salburg, Theater du Chatelet in Paris, Grand Theater in Geneva, participated in concerts in Munich, Bonn, Berlin, Zurich, Geneva. He toured in Italy, Spain and Russia. Collaborates with the National Opera of Ukraine. Associate Professor of Solo Singing, Odessa National Music Academy. Antonina Nezhdanova.