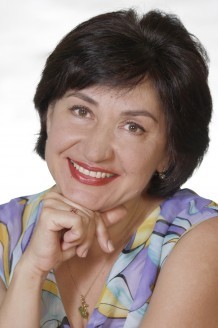 Laureate of the first prize and the main prize of the All-Ukrainian national competition "Golden Autumn" (1987), laureate of the third prize of the XII All-Union Competition of vocalists named after Mikhail Glinka (1987), laureate of the first prize at the International Competition for Young Opera Singers in Belgrade and the Prize of the Union of Composers of Yugoslavia XVIII (1988), winner of the Grand Prix at the II International Vocal Competition "Amber Nightingale" in Kaliningrad (1994), laureate of the III prize International Competition. Stanislava Moniuszko (Warsaw, 1995). Graduated with honors from the Odessa State Conservatory (now the National Academy of Music) in 1988 (class of Professor Alisa Jamagortsyan, Honored Artist of Ukraine). Performs the roles of Tatiana in the opera Eugene Onegin, Agnes in the opera The Maid of Orleans, Iolanta from the opera of the same name by Pyotr Tchaikovsky, Desdemona in the opera Othello, Violetta in the opera La Traviata, Ines in the opera Troubadour by Giuseppe Verdi, Adina in opera "Love Potion" by Gaetano Donizetti, Carolina in the opera "The Secret Marriage" by Domenico Cimarosa, Rosina in the opera "The Barber of Seville" by Gioacchino Rossini, Nedda in the opera "Pagliacci" by Ruggiero Leoncavallo, Margarita in the opera "Faust" by Charles Gounod, Michaela Carmen "by Georges Bizet, Zemfira in the opera" Aleko "by Sergei Rachmaninoff. She has toured in the Baltic countries, Russia, Germany, France, Norway, Sweden, Italy, Greece, Yugoslavia, Japan, Australia. Professor of the Department of Solo Singing of the Odessa National Academy of Music. Antonina Nezhdanova. A number of students are laureates of international competitions, leading soloists of the Odessa National Academic Opera and Ballet Theater. He works closely with the Odessa National Symphony Orchestra under the direction of Hobart Earle. Since 1995 he has been cooperating with the International Concert Organization "Muzica Est".