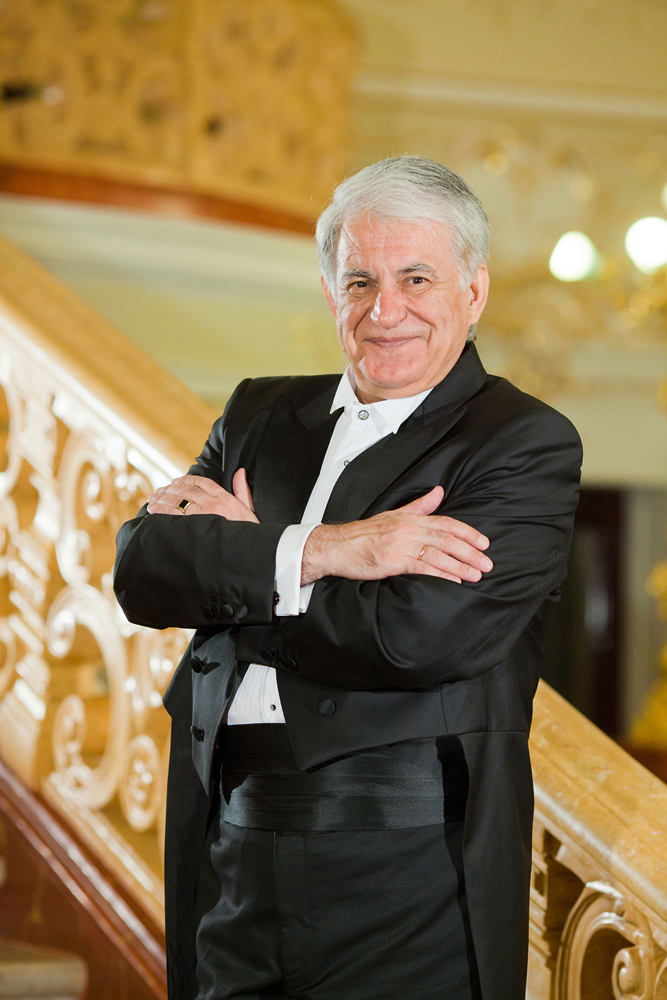 People’s Artist of Moldova, Laureate of State Prize and The Knight Order of Merit of The Republic of Moldova, prizewinner of The Irina Arkhipova’s Fund in 2001 (Gold Medal)

Aleksandru Samoila graduated from The Rimsky-Korsakov St. Petersburg State Conservatory (Prof. V. Stoller and A. Yanson’s class), as well as The Mussorgsky Ural State Conservatory (Prof. Mark Paverman’s class). Being Principal Conductor and Artistic Director at the National Opera of The Republic of Moldova from 1981 till 2003 Aleksandru Samoila worked with The National Orchestra of Russia, The Tchaikovsky Grand Symphony Orchestra, The St. Petersburg Philharmonic Symphony Orchestra, The New Philharmonic Tokyo (Japan), and The Orchestra of National Radio of Romania. Aleksandru Samoila conducted in The Bolshoi Theatre of Russia, The Stanislavsky and Nemirovich- Danchenko Moscow Musical Theatre, The St. Petersburg Mikhailovsky Theatre, in the opera houses of Kyiv, Minsk, Samara, Chelyabinsk, Ufa, Yekaterinburg and other cities. The conductor has taken part in numerous opera festivals Irina Arkhipova Presents with participation of the world-famous opera stars. Maestro is a co-founder and co-producer of the opera festival Maria Bieshu Invites and has been leading the festival and the Bieshu Contest of Young Opera Singers for more than 20 years. Aleksandru Samoila has brought up more than sixty opera and ballet productions in the theatres of many countries. Maestro has conducted in England, Spain, Italy, Portugal, Ireland, Scotland, Iceland, Japan, Hungary, Bulgaria, Turkey, and Romania. The conductor has been working with National Opera of Romania since 1988 and has put up a number of significant opera productions there. In 1996 Aleksandru Samoila conducted Aida by Verdi in London Royal Albert Hall for the first time. It was so brilliant that every season maestro is invited to conduct in London and other cities of England, Ireland and Scotland (Norma by Bellini, Nabucco and La Traviata by G. Verdi, Carmen by Bizet, Tosca, La Bohème, Madam Butterfly, Turandot by Giacomo Puccini, The Bat by J. Strauss, etc). Maestro Samoila took the position of principal conductor and artistic director in State Opera of Izmir (Turkey) in 1990 regularly working with ensembles of the opera houses of Istanbul, Ankara, and Anatolia where he brought up quite a number of productions (Electra by R. Strauss, Rusalka by Dvorak, Eugene Onegin by P. Tchaikovsky, Macbeth, Othello, Il Trovatore, Rigoletto by G. Verdi, Hoffmann’s Tales by J. Offenbach, Il Barbiere di Siviglia by G. Rossini, L'Elisir d'Amore by G. Donizetti, Le Nozze di Figaro, The Abduction from the Seraglio, Zaide, Die Zauberflöte, Don Giovanni by Mozart and other operas). Aleksandru Samoila has been a permanent participant of the International Opera Aspendos, for which he has produced opera Médée by L. Cherubini, Lucia di Lammermoor by G. Donizetti, Nabucco and Aida by G. Verdi, Carmen by Bizet, La Bohème by Giacomo Puccini, Cavalleria Rusticana by Pietro Mascagni, Pagliacci by Ruggero Leoncavallo etc. Maestro has taken part in Istanbul Opera Festival for a number of times. In 2000 the conductor brought up a grand production of oratorio Paulus (Paul) by F. Mendelssohn with participation of four choirs, soloists and a symphony orchestra with doubled number of musicians for the festival in antique Ephesus. The event was dedicated to the 2,000th anniversary of Christianity. Aleksandru Samoila has been Principal conductor and Musical director of the Odessa National Academic Opera and Ballet Theatre since 2009 till 2019.