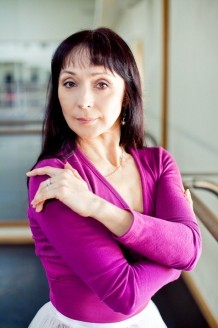 Olena Baranovska is the only ballerina who represented Ukraine at the last concert of Mr. Nuriyev in London. She is also the only Ukrainian  ballet dancer who was invited to a concert of the 400th anniversary of Warsaw. She bore a Ukrainian banner of art in tours in Britain, the USA, Canada, Japan, Italy, Spain, France and Germany. She danced on the pyramids of Egypt and in many other countries. The whole world of fans knows her. She received a personal recognition from Maya Plisetskaya for Carmen in the ballet “Carmen Suite”. Her creative story began in 1981, when Elena graduated from Perm State Choreographic School (the class of Honoured Teacher of Russia N. Silvanovich). From 1981 to 1986 she worked as a ballet soloist at Perm State Academic Opera and Ballet Theatre named after P. Tchaikovsky. From 1986 to 2011 she was a soloist of Odessa Academic Opera and Ballet Theatre as a leading master. Since October 2011 Elena Baranovskaya is a tutor and since July 2017 - the head of the art department of ballet of Odessa National Academic Opera and Ballet Theatre. She is a laureate of the Republican Ballet Contest in Donetsk (1987, I Prize). She worked with such outstanding ballet masters of our time as People's Artist of the USSR Yu.Grigorovich, People's Artist of Russia Mikhail Boyarchikov, Honoured Artist of Russia M. Sadimbaev. The ballerina performed with the troupes of the Bolshoi, Mariinsky theatres in Russia, as well as the theatres in Donetsk, Kharkov and Dnepropetrovsk. As a member of Odessa Opera Company, she toured in Japan, Finland, Hungary, China, she was invited to National Opera of Ukraine to perform the leading parts in the premieres. She performed the roles of Nikiya (La Bayadere), Kitri (Don Quixote) by  L. Minkus; Giselle (the Adan’s ballet of the same name), Odette-Odile (Swan Lake), Masha (The Nutcracker), Aurora (Sleeping Beauty) by P. Tchaikovsky, Carmen (Carmen Suite) by G. Bizet-R. Shchedrin and  others. O. Baranovska has taught at Odessa State School of Culture and Arts named after K. Dankevych. Her students have often become the laureates of international competitions and work on the best stages of the world.