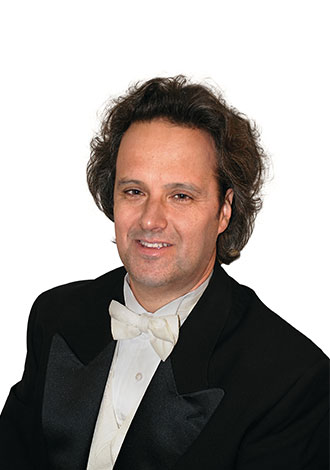 He was recognized as one of 30 «Professionals of the Year» by Musical America Worldwide (2014), and in conjunction with leading newspapers, the Russian Cosmonaut Association named a star in the ‘Perseus’ constellation as ‘Hobart Earle’ (2003).

Music Director and Principal Conductor of the Odessa Philharmonic Orchestra, Hobart Earle has elevated the orchestra to a position of international prominence, unprecedented in the history of the organization, performing in such concert halls as the Musikverein (Vienna), the Philharmonie (Cologne), Barbican Hall (London), the National Auditorium (Madrid), Orchestra Hall in Chicago, the Great Hall of the Moscow Conservatory, Carnegie Hall (New York) and the Kennedy Center (Washington), Davies Hall in San Francisco and the General Assembly of the United Nations.

In the opera pit, he has led productions with the Greek National Opera and the Mythos Opera Festival, and in the recording studio, has recorded with the Russian State Symphony and Odessa Philharmonic for Naxos and Toccata Records. His performance of Tchaikovsky’s 5th symphony in Vienna’s Musikverein was recorded by the Austrian Radio live in concert, and awarded “Best Classical Album 2002” at the ‘JPFolks Music Awards’ in Hollywood, California. His recording of music by Myroslav Skoryk was chosen by Naxos CEO Klaus Heymann in the “Chairman’s Choice 2014 – Klaus Heymann’s Favorite Naxos Releases”.

The Odessa Philharmonic Orchestra was founded in 1937 and throughout the Soviet era performed regularly at home under such conductors as Nathan Rachlin, Yuri Temirkanov, Kurt Sanderling, Arvid Jansons and also Mariss Jansons.With the independence of Ukraine, the orchestra’s status rose; in January of 1993 the Government of Ukraine formally awarded the Odessa Philharmonic Orchestra federal status.

The new status was acknowledgment of the orchestra’s dynamic progress during the preceding two years under new music director Hobart Earle. The orchestra has since become the first from Ukraine to cross both the Atlantic Ocean and the Equator. In the years since 1992 the orchestra and Hobart Earle have made a total of fifteen trips abroad to twelve different countries, performing in such major concert halls as the Musikverein in Vienna, the Philharmonie in Cologne, the Beethovenhalle in Bonn, the Barbican Hall in London, the National Auditorium in Madrid, the Gr eat Hall of the Moscow Conservatory, Great Hall of the St. Petersburg Philharmonic Society, Carnegie Hall in New York and the Kennedy Center in Washington, D.C., Orchestra Hall in Chicago, Davies Hall in San Francisco and the General Assembly of the United Nations. In addition to their regular concerts at home in Odessa, during the 1990s the orchestra and Hobart Earle have traveled to the Ukrainian cities.

The OPOs series of CD recordings «Music of Ukraine» under Hobart Earle for British record label ASV features previously unrecorded works by Ukrainian composers. In June 2002, the orchestra’s status was raised again, when the President of Ukraine, Leonid Kuchma, signed a decree granting National status to the Odessa Philharmonic Orchestra.