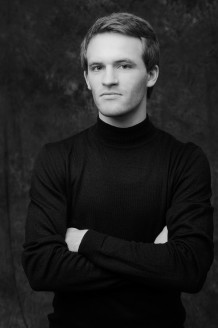 Participant of the VII International Choreography Competition "Crystal Shoe" (Kharkov, 2011). He graduated from the Kiev State Choreographic School in 2012. During his studies he danced in the ballet "The Nutcracker" at the Kiev Municipal Academic Opera and Ballet Theater for Children and Youth, as well as took part in tours in Japan. He was admitted to the ballet troupe of the Odessa National Academic Opera and Ballet Theater in 2012. Performs corps de ballet in the ballets "Swan Lake" and "Sleeping Beauty" by Peter Tchaikovsky, "Giselle" by Adolf Adan, "Don Quixote" and "Bayaderka" by Ludwig Minkus. He also dances in the ballet "Triumph" in the opera "Aida" by Giuseppe Verdi.