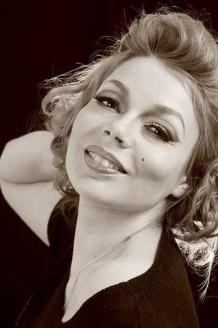 Laureate of the 1st prize of the international vocal competition in Vorzel (2006), laureate of the 1st prize of the international festival "Crimean Autumn" in Simferopol (2006), laureate of the international competition of opera singers. Salome Krushelnytska in Lviv (2009). Winner of the special prize of the international vocal competition in Romanian Galati (2007) and the Grand Prix of the international vocal competition. Nazira Akhmedova in Tashkent (2009). She graduated from the vocal faculty of the Odessa State (now - National) Music Academy named after I. Antonina Nezhdanova in 2005, as well as graduate school - in 2008. In 2003-2005 she received a personal presidential scholarship for success in her studies and creative activity. In 2008 she was invited to the musical theater Nae Leonardo in Romanian Galati, where she performed the part of Gilda in Rigoletto, and also sang in concerts Gala Lirica and In memory of Maria Callas. In 2008 she took part in the concert "From Mozart to Verism" at the George Enescu Philharmonic in Bucharest with conductor Robert Gianola (Italy). With this program she toured Rome, Naples, Genoa, Lucca. She took part in tours with the Crimean Philharmonic, as well as in music festivals dedicated to the anniversary of Mozart and “Two days and two nights of new music” in Odessa. Performed the parts:
«Rigoletto»:
Gilda
«La Traviata»:
Violetta
«Masquerade Ball»:
Oscar
«Lucia di Lammermoor»:
Lucia di Lammermoor
«Carmen»:
Michaela, Frasquita
«The Barber of Seville»:
Rosina
«Bohemia»:
Musetta
«Maid-Madam»:
Serpin
«The Queen of Spades»:
Masha and Prilepa
«Carmina Burana»:
Soprano
«Snow White and the Seven Dwarfs»:
Snow White
«Viy»:
Voice
«Don Giovanni»:
Zerlin
«Genius and Evil»:
Solo
«Orpheus and Eurydice»:
Cupid