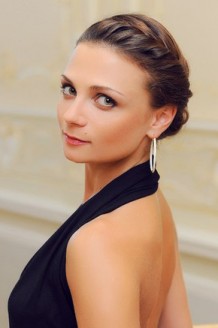 Winner of a bronze medal and the title of laureate of the III International Competition. Yuri Grigorovich "Young Ballet of the World" (Sochi, 2010), Youth Prize named after Leah Bugovoy of the Odessa Regional Department of the NSTDU for the performance of the part of Odette-Odilia in Swan Lake (Odessa, 2009). She was awarded the Certificate of Honor of the Chairman of the Odessa Regional State Administration. She graduated from the Odessa Ballet School, as well as the State School of Arts and Culture named after I. Konstantin Dankevich (class of the People's Artist of Ukraine Elena Baranovskaya). Performed the parts: Has toured to the USA, Canada, Romania, Russia, Kazakhstan. In 2010 she performed in Taiwan in the children's ballets Alice in Wonderland and Little Red Riding Hood. On March 26, 2018, Elena was awarded the honorary title "Honored Artist of Ukraine".