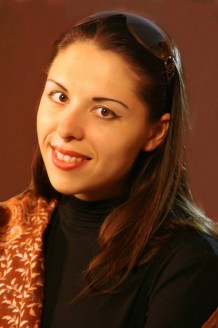 Laureate of the III Prize of the Second International Competition named after Anatoly Solovyanenko "Solov'iny Fair" (Donetsk, 2002), diploma winner of the international competition of vocalists. Hariklei Darkle (Romania, 2005), 1st stage diploma winner of the All-Ukrainian Festival of Greek Song Performers dedicated to the memory of Tamara Katsi (2006). Graduated from the Dnepropetrovsk State Music College named after I. Mikhail Glinka in piano in 1996, as well as the Odessa State (now National) Music Academy named after I. Antonina Nezhdanova in piano and vocals in 2002. Since the same year he has been working at the Odessa Opera and Ballet Theater. Parts in the repertoire: Has performed in recitals in Russia, Scotland, France, Germany and England.