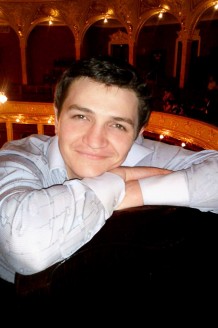 Winner of the first prize of the international competition of vocalists "Art of the XXI century" in Vorzel (Kyiv region, 2010), winner of the third prize of the V open competition of young vocalists named after Anatoliy Solovyanenko, participant of the International Festival of Vocal and Piano Duets "Three Centuries of Classical Romance" (St. Petersburg, 2011). In 2006 he graduated from the vocal department of the Chernivtsi State School of Arts and Culture. Sidor Vorobkevich. In the same year he entered the preparatory course of the Odessa State (now - National) Academy of Music. Antonina Nezhdanova (class of Honored Artist of Ukraine Viktor Mityushkin). In 2007 he was admitted to the first year of the academy, in 2012 he graduated with a master's degree. Currently - a graduate student of the Odessa National Academy of Music. Antonina Nezhdanova. He has been working in the opera troupe of the Odessa National Academic Opera and Ballet Theater since October 2012. In the repertoire of the singer of the party Figaro (opera "The Barber of Seville" by Gioacchino Rossini), the Young Leader (musical fairy tale-opera "Snow White and the Seven Dwarfs" by Eduard Kolmanovsky), Robert (opera "Iolanta" by Peter Tchaikovsky). In the near future - the performance of Shonar's part in Giacomo Puccini's opera "Bohemia".